Download Add to Lightbox Add to Cart
Image 1 of 1
aviation-jet-fury-112904.tif 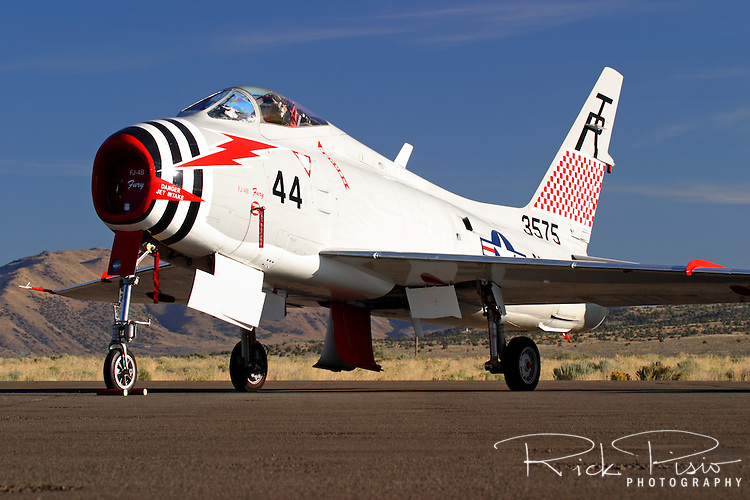 An FJ-4B Fury sits on the tarmac in the morning sun at Stead Field in Nevada. The FJ series of U.S. Navy aircraft were designed by North American Aviation in the 1940's at the same time as the Air Force F-86 Sabre. The FJ-4B is an attack version of the Fury and was the first jet designed to carry a nuclear weapon from the deck of an aircraft carrier

Built in 1958 BuNo 143575 was first delivered to to VA-192 "Golden Dragons" on board the USS Bon Homme Richard. After operating with several other Navy squadrons it ended its career with VA-216 "Black Diamonds" aboard the USS Hancock in Vietnam. Saved from disposal in 1971, and registered as N400FS, this aircraft was used to test the radar pattern-matching guidance system of the Pershing II intermediate range ballistic missile.

In 1991 the aircraft was again rescued and work begun to restore her to flying status which was completed in 2002. The paint scheme is that of the FJ-4's of the Fleet Air Gunnery Unit at NAS El Centro, California in honor to all FJ pilots who did their gunnery training at FAGU El Centro. Flown at airshows throughout the West the only flyable FJ-4B can be seen regularly flying with current Navy aircraft as part of the Navy's Tailhook Legacy Flight.
Rick Pisio\RWP Photography